Oli: Before this virus, there was already one existing. 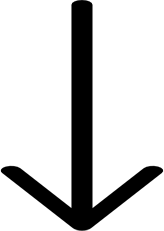 Scroll Down
The Skies are Clearer
Randy is a celebrated artist and architect. Materiality is central to his practice. On a professional basis he deals with robust materials like timber, concrete, glass and steel, yet when asked to create at this point in his life, in this moment of pandemic, he creates with string.

Indeed, the focal motif in Randy’s piece is a personalised ritual of weaving.

The weaving occurs within two physical spaces that represent a sanctuary for Randy. His current house which he built and resides with his family and a wayang house he built on his childhood stomping ground. In both spaces, Randy makes way for nature.

There is a meditative fervor to which Randy shapes the two woven structures within the interiors of both his cherished physical spaces. He moves around weaving in a circular fashion, knotting and adding layers. If Randy were to unravel his weaving, it would come undone to form a single line.

This line becomes a continuum where history and memory coalesce with the present and the future. Randy doesn’t deny the discomfort of the present. He relates the line to life’s journey where he gazes at his young children on one end and at his aged parents on the other, accentuating his existence in the middle.

Rather than be clouded by the paralysis of the moment, Randy chooses to see that the skies are clearer, nature is thriving and that as a new dawn arrives, we might have learnt to cherish what matters.
Natalie Hennedige

Millie: Like the 40-day flood in the book of Genesis that washed away every human who defiled the earth, which was every human, to purify the earth. Like that? 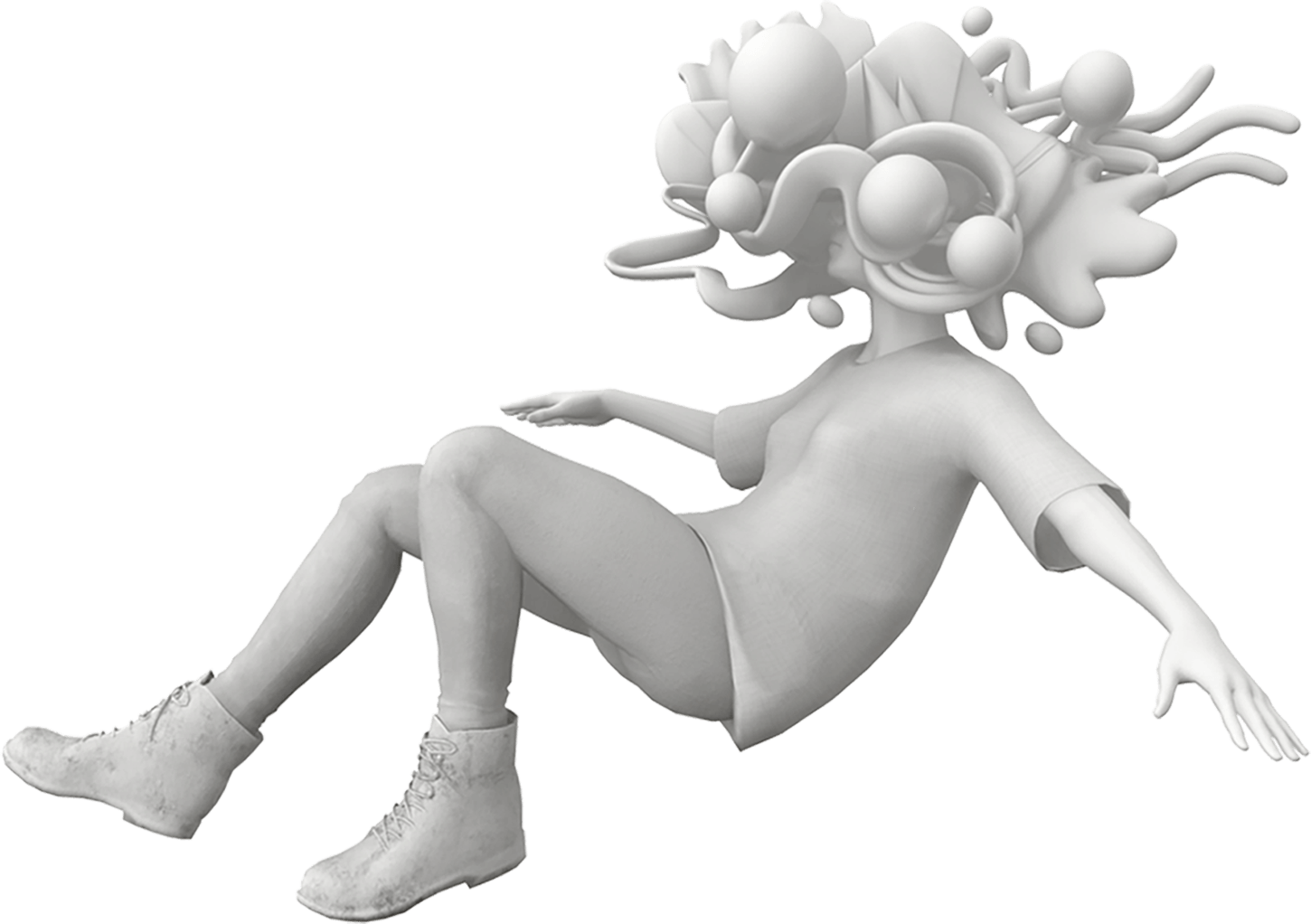 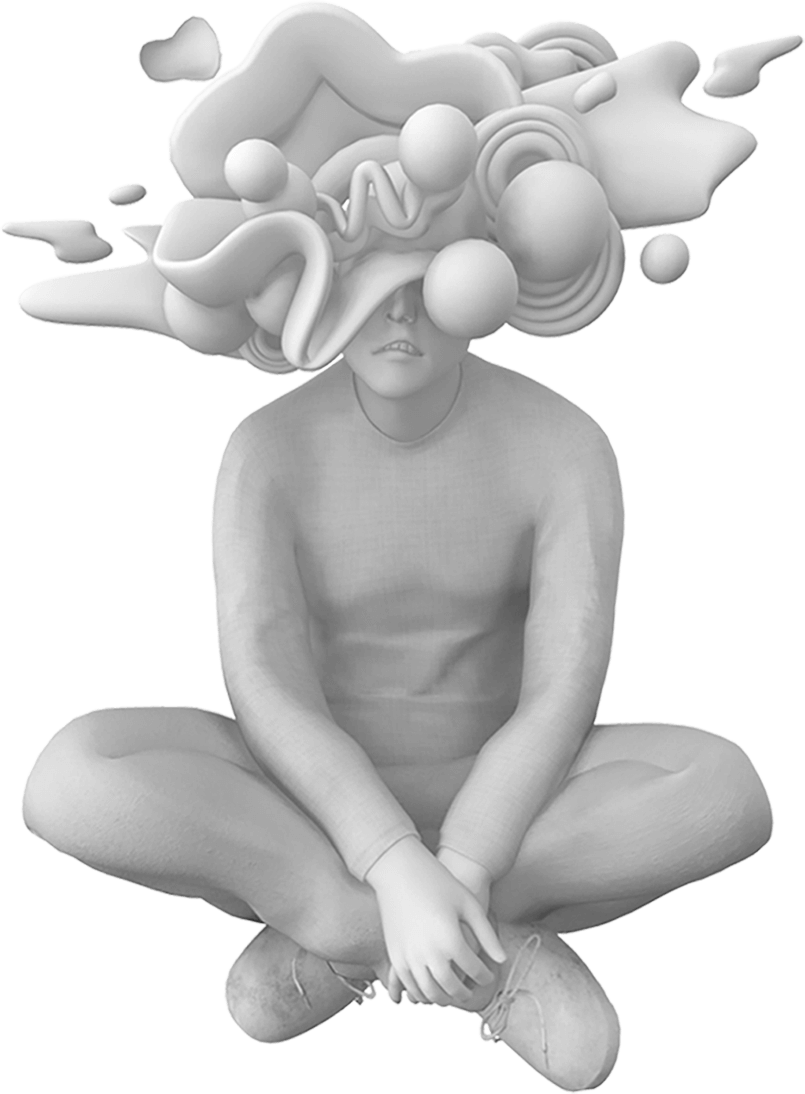 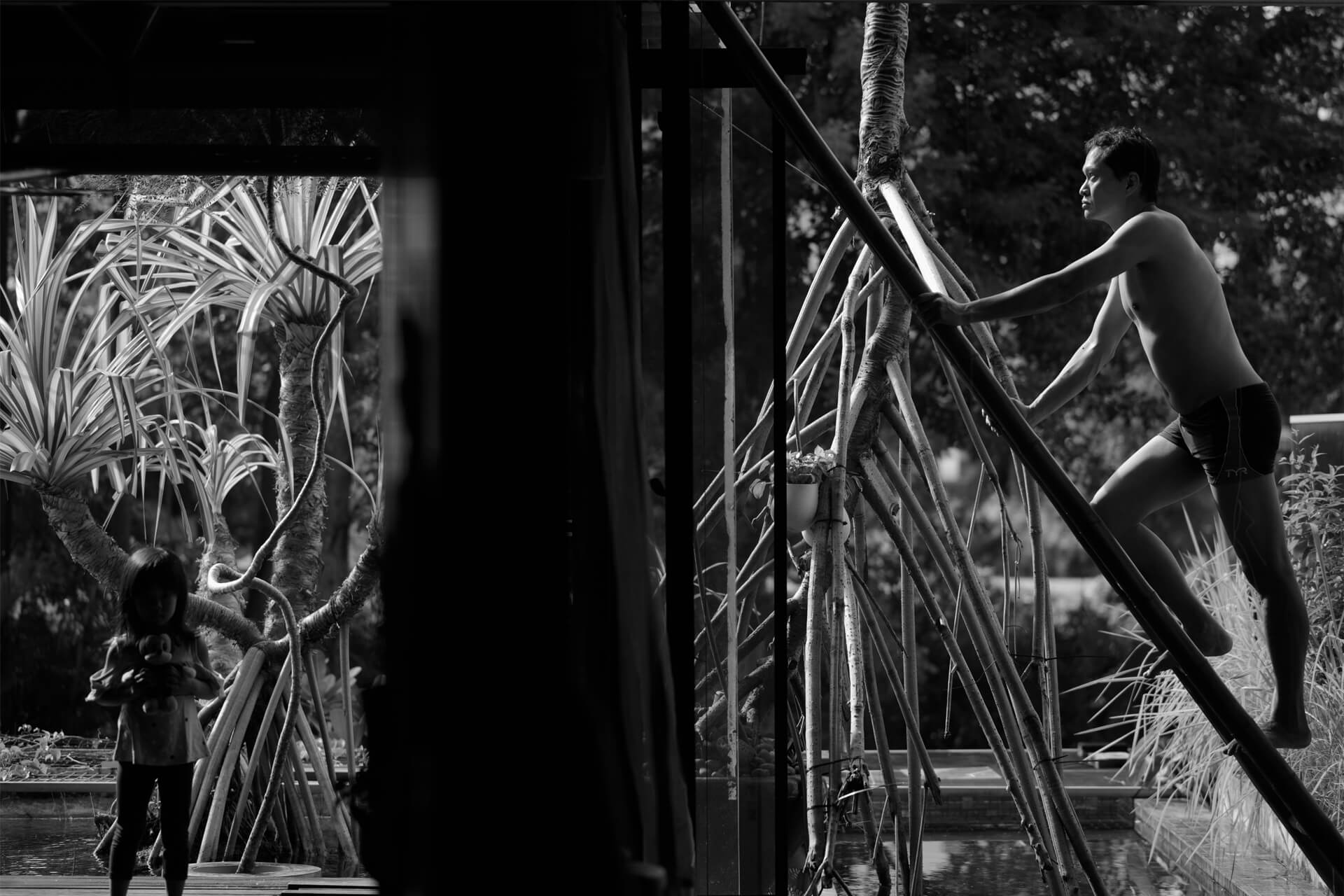 In these unusual days, I have been dreaming
of a tree house which stands elevated in the middle of a disused school field. It has a banyan tree in the middle with an improvised colourful drape and netting transversed from end to end. I see myself toiling night and day, covering and draping, intertwining the drape, my body and the tree house as one. Spin and spin and never stop.
Spin   and   spin   and   never   stop. 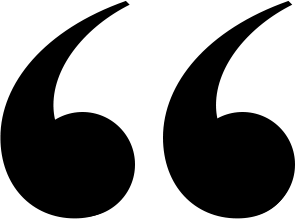 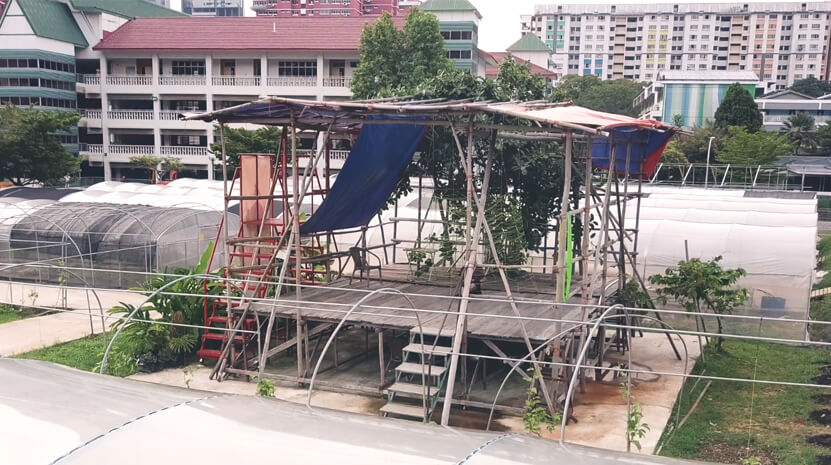 Joining
The Dots
I am looking at this moment in time. It is the conscious act of looking at the life I lead and where we are in this time. I am looking at this moment in time and weaving a story. It is a story of everyday life.  The weaving is a physical ritual. It is something I felt compelled to do to draw out my inner self. To share my inner self with the people I know, people close to me. To share with them what the web represents symbolically in ways words cannot describe. Using string, using a weaving apparatus. Expressing a certain physicality through a process of movement, through a process of walking, through a process of moving through time. Not time in the usual hurried way, but pacing, moving in a round, weaving the construct.  This construct, if i were to really say what it reflect  for me at this point in time, is really about joining the dots. A line is also a point. 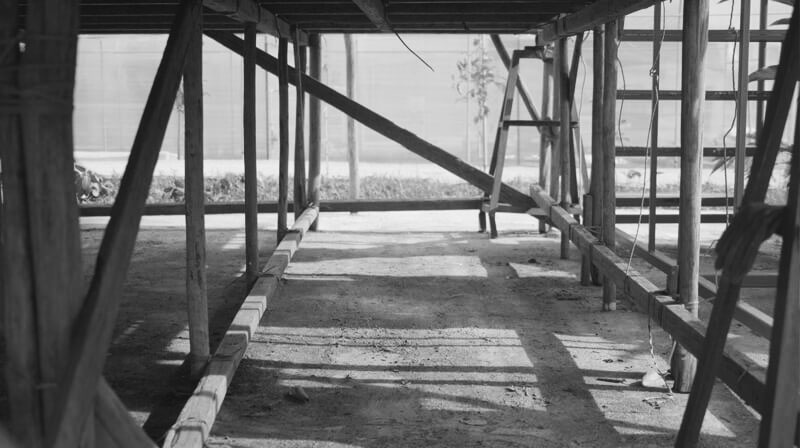 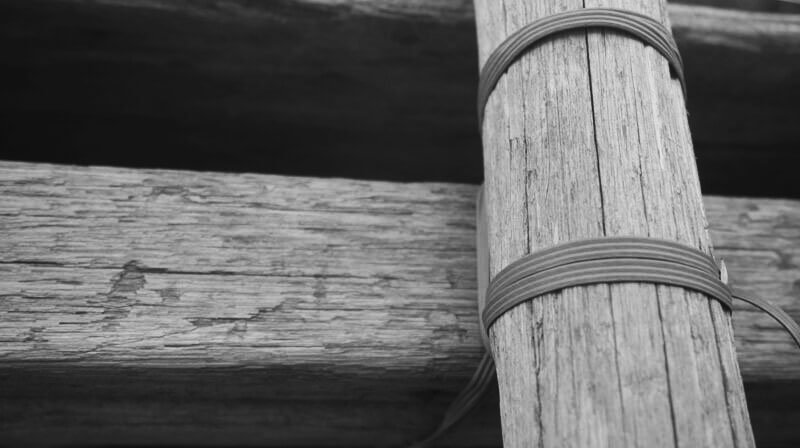 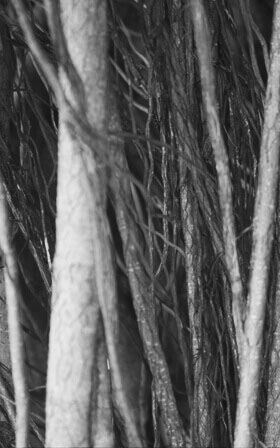 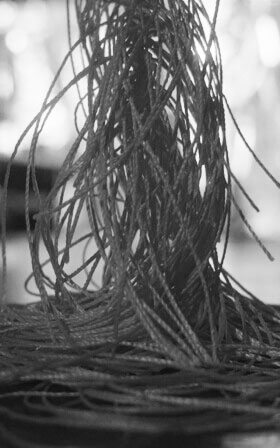 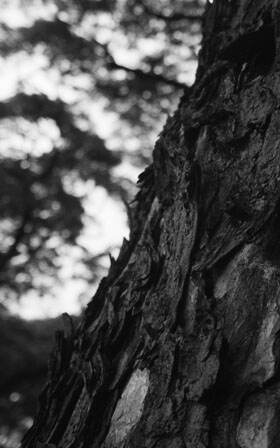 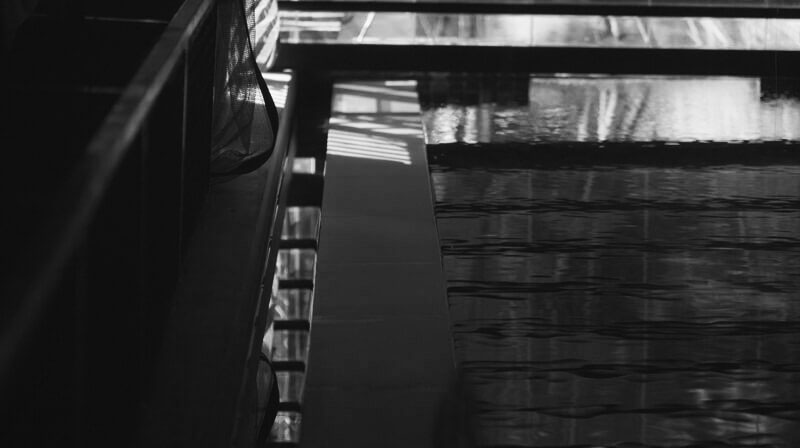 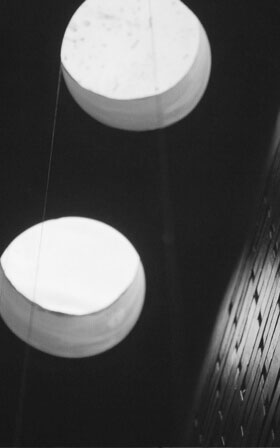 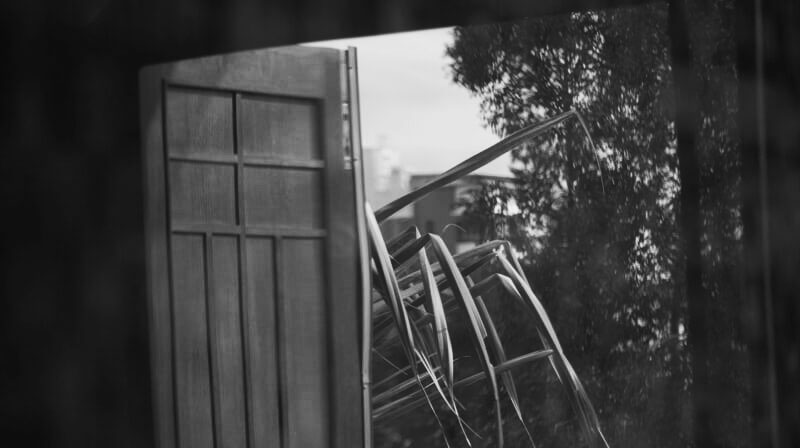 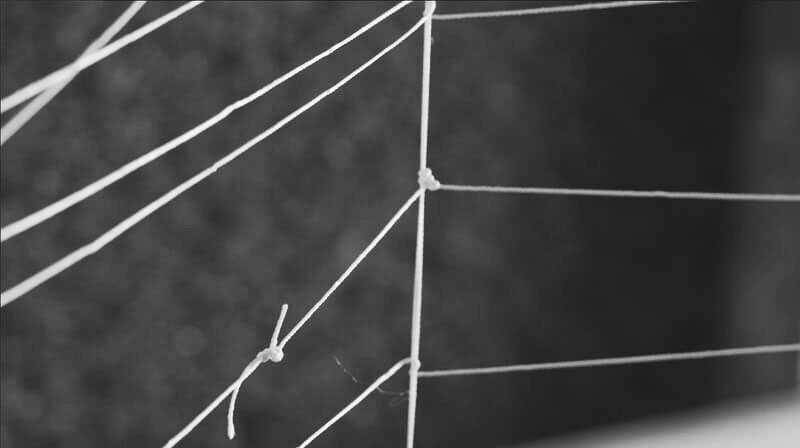 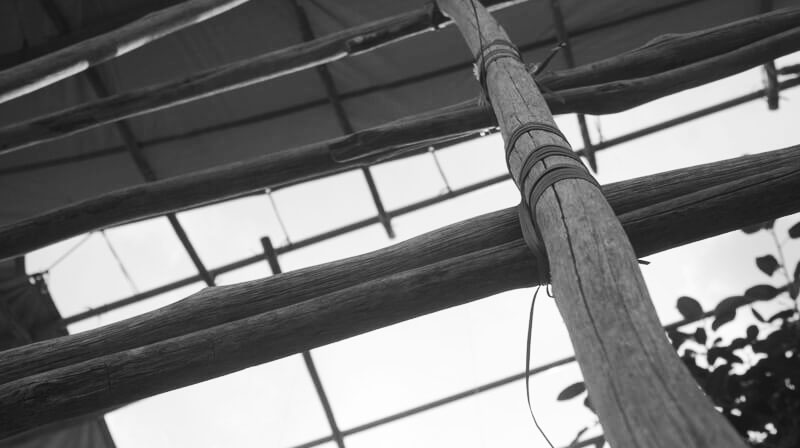 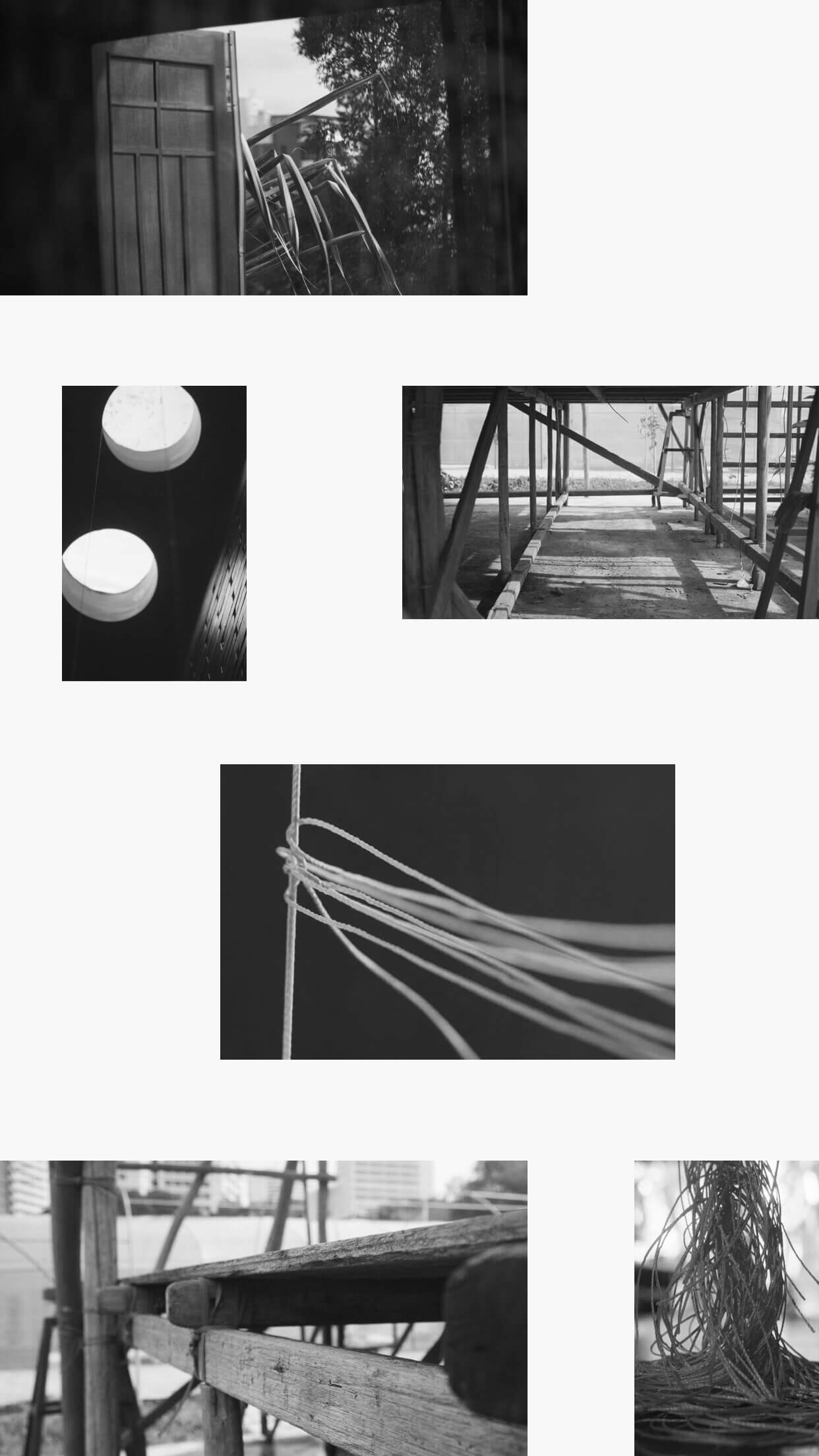 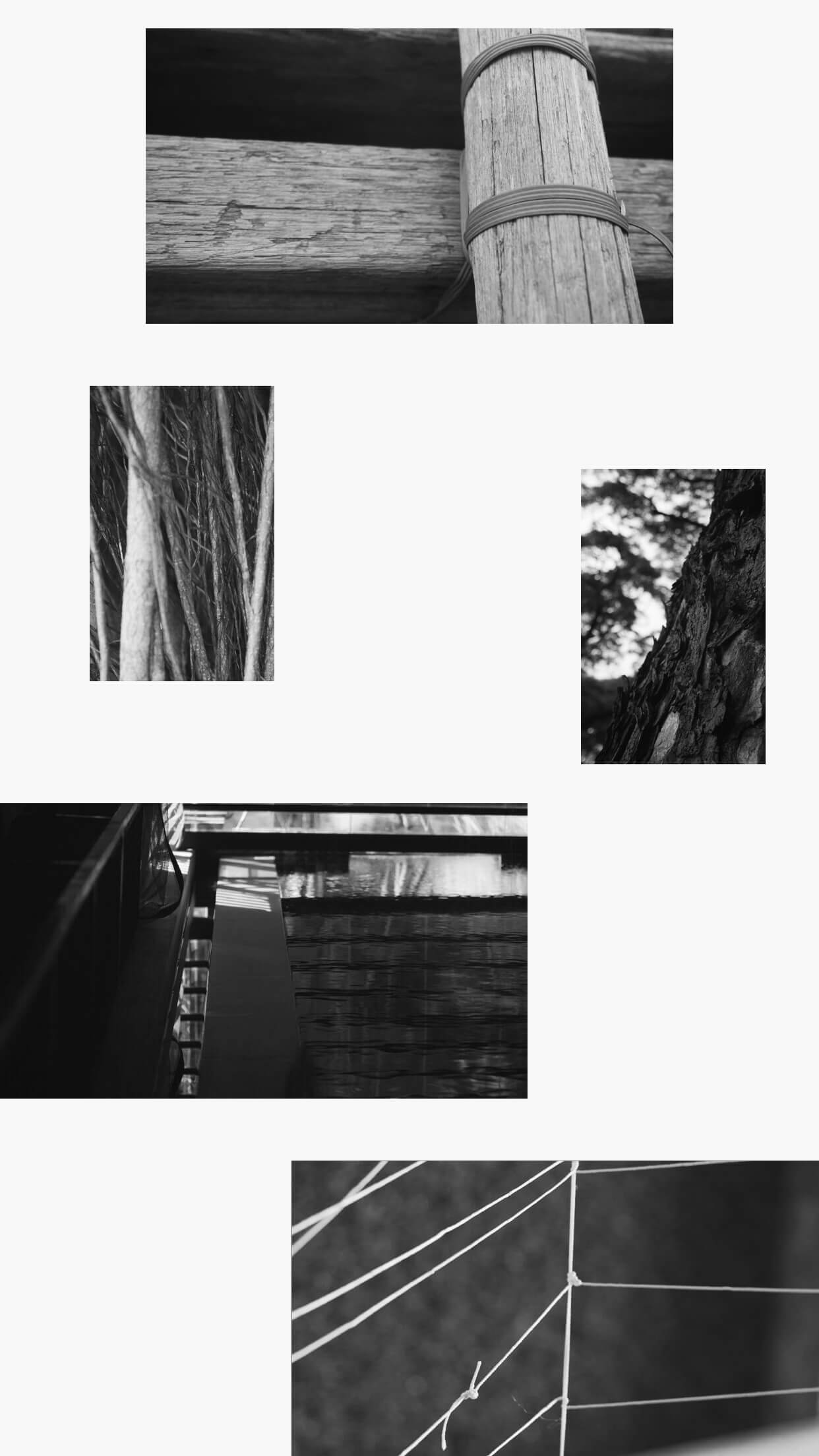 Randy Chan
is the Principal of Zarch Collaboratives. His portfolio spans architecture, landscape urbanism, art installations, curation, galleries and exhibitions. His works have received local and international recognition and have been featured in a number of architectural publications with awards including the SIA Architectural Design Award (Gold), URA Urban Heritage Award, Futurarc Green Leadership Award, IFLA AAPME Award (Outstanding). The firm’s projects mirror Randy’s fascination with sustainability, landscape urbanism, placemaking, community, heritage and narrative. Highlights include the Warehouse Hotel, No.17 Geylang Lorong 24A Shophouse, Jacob Ballas Children’s Garden Extension, Windsor Nature Park, Lien Villa and the Sustainable Singapore Gallery at Marina Barrage. In 2018, the Warehouse Hotel was awarded Hotel of the Year at the prestigious AHEAD Asia hospitality awards. Additionally, Jacob Ballas Children’s Garden and the Sustainable Singapore Gallery were shortlisted at the World Architecture Festival and the INSIDE World Festival of Interiors respectively.

Working at the intersection of art and architecture, Randy’s creative oeuvre includes stints as principal set and stage designer for the 2010 Singapore Youth Olympic Games ceremonies, several editions of the National Day Parade and Singapore’s Supergarden Pavilion at the 2008 Venice Biennale. Randy was appointed creative director and designer of the Singapore Pavilion at the World Expo 2005, 2012 and Singapore: Inside Out traveling exhibition 2015 and 2017. His artworks include Memory Conduit, Sonic Womb, File Not Found exhibited at the Palais de Tokyo, Paris and Building as a Body. A collaboration with local designer kwodrent and commissioned by the Singapore Art Museum, Building as a Body was awarded Design of the Year at the President’s Design Award 2012.

Randy currently serves on the Jury Panel of the Singapore Institute of Architects and is part of the Sub-Committee on Future Corporate Capabilities and Innovation, Committee on the Future Economy. Additionally, Randy serves on the Venice Biennale Artist Selection Panel and the Board of Directors, Wild Rice Theatre. 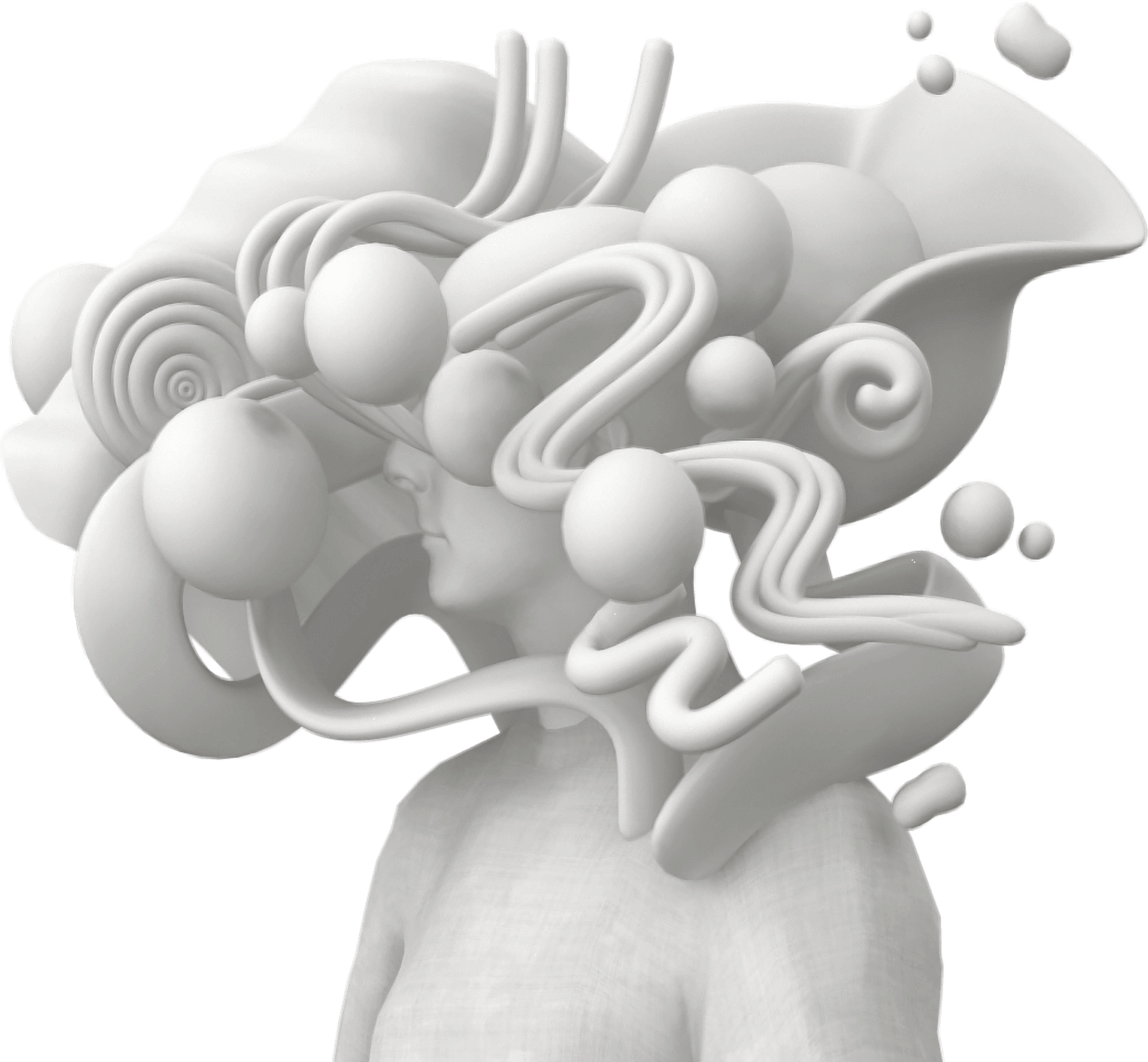